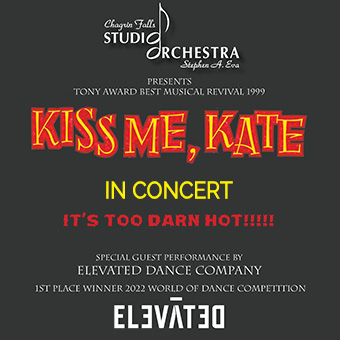 The Chagrin Falls Studio Orchestra and Chagrin Valley Little Theatre join to present a ‘concert performance’ of Cole Porter’s classic musical comedy, Kiss Me, Kate. The full 30-member Studio Orchestra will be on stage with the singer / actors in the lightly staged full production.

BRUSH UP YOUR SHAKESPEARE!
Kiss Me, Kate includes well-known songs like “Another Op’nin’, Another Show”, “So In Love” and the ever popular “Brush Up Your Shakespeare” – performed by the two wacky gangsters (Don Bernardo and Eric Oswald) stealing the show as they chase the leading lady around the theater!

Kiss Me Kate tells the tale of two once-married, now-divorced musical theater actors, egotistical leading man Fred Graham and Lilli Vanessi, who are forced to perform opposite each other in a Broadway-bound musical version of William Shakespeare’s The Taming of the Shrew, in the roles of Petruchio and Katharina.

As the battle of the sexes continues onstage and off, it becomes clear that as much as this couple profess to hate each other, they are also still in love. Throw a number of cases of mistaken identity, some gangsters, and additional romantic entanglements into the mix.